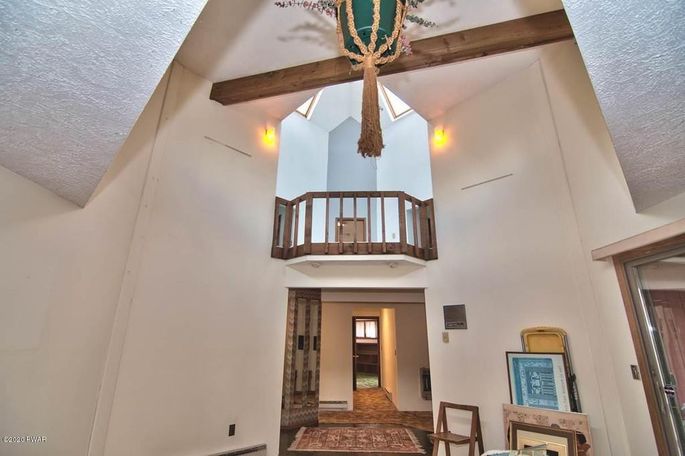 A house built to honor the great pyramids of Egypt is now a fixer-upper with potential in Pennsylvania. Listed for $299,900, the pyramid house is a local landmark in its Lake Ariel, PA, neighborhood.

“The community has a lot of chalet homes and vacation style, but this one is kind of a landmark in the community,” she says.

She says people always point it out, and her first reaction was to wonder what it’s like inside. From the main level of the three-bedroom house, it’s possible to see all the way to the top of the triangular peak.

The home now features Egyptian decor, and one of the sleeping areas, the master bedroom at the top, is a little quirky.

“It’s like the loft area, with the skylights there,” Meagher says.

However, there isn’t much privacy—it is open to the living area below and looks down onto the main living space.

“You’ll see that throughout some of the vacation homes that owners like the open master bedroom concept. It’s more common than you would think,” Meagher says, adding that new owners could seal the space off, but the interior of the house would lose its pyramid effect.

Built in 1984 by the current owner, the house does look its age. It’s an ideal scenario for a buyer to come in and make the place over.

As currently configured, both the kitchen and the dining area are a little small.

Meagher feels a buyer would probably want to add new flooring, open the kitchen and dining area and create a larger kitchen. The bathrooms would also need to be updated.

She thinks renovations would probably cost about $50,000.

Many of the main level rooms—including the dining area—have easy access to outdoor decks, extending the living space outside.

“It’s a really cool concept, it just does need to be brought up to speed aesthetically,” Meagher says.

The house is in a huge neighborhood called The Hideout, which has about 3,200 homes, about two-thirds of which are vacation residences. Meagher says about 400 properties have sold in the area in the past six months.

Watch: You Can Take In Seattle’s Entire Skyline From This Historic Home

“It’s a destination, a vacation spot,” she explains.

The 3,819 square feet in the house includes a large unfinished basement with windows and a walkout sliding door. It’s untapped so far and ripe for expansion.

“Someone could easily finish that up to make a really cool family room—and even two more bedrooms,” Meagher says. “A lot of the homes here have finished lower levels, and that’s where the fun happens.”

She says the home has a ton of potential for the right buyer.