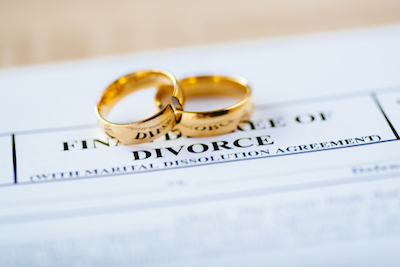 The average couple has a number of topics to discuss on their to-do list before heading to the altar. The least romantic topics, if they even make the list at all, are probably concerning debt and the possibility of divorce. If you foresee a divorce in your future or are currently going through one, it’s safe to say that you have some burning questions about your finances. Perhaps you and your spouse acquired some debt during the course of your marriage and you’re now wondering who is going to be responsible for what. While it’s important to note that each situation is unique, there are some ground rules in the Divorced with Debt arena. In the below sections, we’ll address the usual ways in which debt is divided up between each spouse.

If you’re trying to figure out what debts you will be responsible post-divorce, you will first need to know if you live in an equitable distribution state that follows common law or if you live in a community property state. When it comes to debt and the divorce process, most states follow common law for property, meaning that following a divorce, each ex-spouse will be held responsible for the debt that they took on. In a community property state, both spouses, considered to be the “community,” may both end up equally responsible for debt that incurred throughout the marriage, known as “community debt.” The following states are Community Property States:

Most of the time, the banks aren’t interested in how the courts decide to split up your debt. Even after a divorce, the original contract or credit card agreement will typically overrule a divorce decree. This means that if the original agreement was set up under your spouse’s name, the banks are going to expect the payments to be as such. As you can imagine, this could potentially cause problems with an ex-spouse who is being asked to pay off debt that is not under their name, or at least under a joint account.

To put it into perspective, let’s imagine that the court orders your ex-spouse to make payments on credit card debt under your name. If your ex neglects to make the payments on time, it’s going to have an effect on your credit report. The good news is that if this happens, you have a right to pursue legal action against your former spouse for not following court orders. However, it’s possible that by the time legal action is taken, your credit score may already be damaged.

Prenuptial agreements will affect these outcomes as well. Depending on yours and your spouse’s marital assets, the debt in question will vary. Here are the typical categories of debt that are affected during divorce proceedings:

It’s possible that you could be responsible for your former spouse’s credit card debt, but it’s not likely. If you have a joint account, then the outcomes may vary. Usually, marital debt is considered to be any debt that was created during the time of the marriage. So if you racked up credit card debt under a joint account, expect that both of you will be equally responsible for paying it off.

If both spouses have their names on the mortgage, the easiest way of solving the mortgage debt is to sell the house and divide the earnings between both parties. It might be tempting to keep the home for a multitude of reasons, but at the end of the day, selling the property and splitting the money is usually the least complicated solution for everyone involved.

Once the house is on the market, it’s time to start communicating with your former spouse about who is going to be responsible for what amount. Come up with an agreement on who will pay which portion of the mortgage, so that neither parties’ credit score is negatively affected.

If selling the home and dividing the earnings isn’t a viable option for you and your ex, then one of you will end up fully responsible for the debt. In most cases, mortgage debt following a divorce is assigned to:

When this happens, one spouse will have to buy out the other spouse’s equity in the property.

When it comes to car loans, things become more complicated. If the car loan has both names on it, here are the two best options:

Let’s say one person ends up with the car loan debt, but the other person was also on the loan as a cosigner. Unfortunately, if one spouse is held responsible for picking up the tab on a debt, and they neglect their payments, both parties can suffer those consequences.

Each state has different laws surrounding medical debt and divorce agreements. If you live in a Community Property state, you might have to pay for your former spouse’s medical debt. However, if you live in a state that follows common law, the court will ultimately make the decision about who is responsible for what debt.

Pay off your debt before the divorce is finalized

If you and your spouse can find a way to work out the kinks of your debt issues before the divorce is finalized, it’ll make things a lot easier in the long run. Work together to figure out who should be responsible for which debt, so that you can lower your chances of having to pay off a debt that isn’t yours.

Generally, credit card debt is going to be easier to deal with than the big things, like home loans and car loans. In many cases, couples who are going through a divorce will have to consider refinancing their loans under one party’s name.

Keep in mind that the original loan agreement supercedes the divorce agreement, so if you wait until your divorce is finalized, you might have a harder time moving things around. You can ask your lender to take your name off of an account and have it replaced with your former spouse’s name, but be prepared to provide the divorce decree as evidence. If it doesn’t work out this way, then seek legal advice from your divorce attorney about your options. Another common solution is to sell the asset in question and use the earnings to pay off the debt.

How your former spouse’s bankruptcy can affect you

If your ex-spouse isn’t able to keep up with the payments on their share of the debt, they might decide to file bankruptcy. This could cause problems for you if you didn’t choose to file as well.

Be cautious about any joint accounts you may still have open post-divorce. If you leave joint accounts open and your former spouse has access to them, he or she could potentially transfer balances from other accounts onto those ones. Safeguard your credit by paying off any debts you can manage to pay off ahead of time, so that you don’t have to worry about it later.