That the pandemic is worse today
than it was last spring appears to be finally dawning on a lot of consumers and
the Home Purchase Sentiment Index (HPSI) for December reflects it. Fannie Mae
says its index, based on six questions from its monthly National Housing
Survey, dropped 6.0 points to 74.0. Five of the components moved lower and the
sixth was unchanged from the prior month. It was the second month in a row that
the index declined, and it is now 17.7 points lower than one year ago. 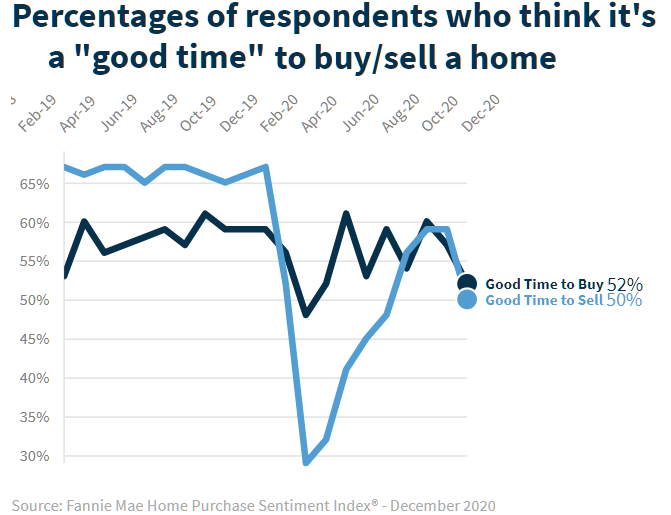 Positive responses dropped for the
question of whether it is currently a good time to buy a home. Fifty-two
percent of respondents said it was, down from 57 percent in November, while the
percentage who say it is a bad time increased from 35 percent to 39 percent. As
a result, the net share of Americans who say it is a good time to buy decreased
9 percentage points month over month to 13 percent. A year ago, the net for
that question was 27 percent.

There were fewer respondents who felt
it was a good time to sell as well, down from 59 percent to 50 percent. The
percentage who say it’s a bad time to sell increased from 33 percent to 42
percent, pushing the net down 18 percentage points for the month and 35 points
year-over-year to 8 percent.

“The HPSI declined for the second
consecutive month and fell to its lowest level since May 2020, as consumers
adjusted to the worsening COVID-19 conditions of the first few weeks of
December – the survey collection period,” said Doug Duncan, Fannie Mae Senior
Vice President and Chief Economist. “Both the ‘Good Time to Sell’ and ‘Good
Time to Buy’ components fell significantly, with respondents overwhelmingly
noting the unfavorability of economic conditions. In particular, the sell-side
component fell for the first time since April and by 18 points, reversing most
of the increases of the past three months and implying to us that, at least temporarily,
potential home sellers might wait to list their homes. If so, this could have
the effect of perpetuating already-tight inventory levels and supporting
additional (albeit lesser) home price growth, which could contribute to a
further moderating of home sales.”

The percentage of respondents who expect
home prices to rise over the next 12 months remained the same at 41 percent,
while the percentage who say they will decline increased from 13 percent to 16
percent and 34 percent expect no change. As a result, the net share of Americans
who say home prices will go up decreased 3 percentage points month-over-month
to 25 percent and was down from 40 percent in December 2019.

Eight percent of respondents said
mortgage rates would decline over the next 12 months, the same percentage as
the previous survey, and the share who expect mortgage rates to go up was also unchanged
at 43 percent. Thirty-nine percent think they will remain where they are, 1
point fewer than in November so the net expecting further declines remained at a
negative 35 percent.

More respondents are concerned about
job security than a month earlier. Seventy-five percent said they were not
concerned about losing their job over the next 12 months, a point fewer than
the previous month while the share who said they are concerned rose a point to
25 percent. This lowered the net share of unconcerned by 2 points for the month
to 50 percent. This is a striking change from December 2019 when a net of 74
percent felt their jobs were secure.

The National Housing Survey from
which the HPSI is constructed, is conducted monthly by telephone among 1,000
consumers, both homeowners and renters. In addition to the six questions that
are the framework of the index, respondents are asked questions about the
economy, personal finances, attitudes about getting a mortgage, and questions
to track attitudinal shifts.